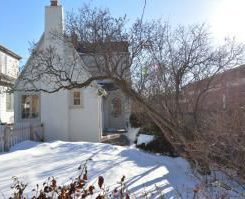 I thought I’d kick things off with a little overview of our house and what I know about what it’s been up to in the last 91 years.

The Gingerbread House is a Tudor Revival style house built in 1926. It’s just under 1,000 square feet and has 2 bedrooms and a small bathroom. It has a stucco exterior and plaster interior walls. It’s not really the best example of Tudor Revival because it doesn’t have any stonework or cross-gabling. It does have exposed beams in the ceiling, a cross-gabled roof, a several arched walkways (including the front entry). The front door is a big, heavy, wood door with strap hinges. I shudder to think how much something like that would cost today!

It’s also probably not strictly a Storybook Tudor because it lacks a lot of the “whimsical” detailing they have. But as soon as my Hansel and I saw it, we dubbed it The Gingerbread House. And when I was at the open house, I heard another set of people call it a “Hansel and Gretel” house. There’s just something about it that makes you feel like you’re in an old fairytale. Sometimes, as people are walking by, they stop and comment on how much they love the house or are “obsessed” with it. It’s cute, cozy, and quaint.

It has a little gas fireplace and original windows in the living room. The dining room and bedrooms have cool old picture rail molding. The windows in one of the bedrooms were replaced with awful vinyl things that now have moisture between the panes. The other windows are also replacements, but they’re wood, 25 years old, and still in good shape. All the floors are wood except the bathroom, which has black and white basketweave tile. It has a bright little half basement that might be the only (mostly) non-creepy basement I’ve ever seen. And the ceilings in the stairways have this cool curved shape that I love. It also has a ton of perennials in the front and back yard and a little twisty, leaning tree that’s very fairytale-ish.

There’s a lot I still don’t know about the house. I haven’t done much digging yet, but apparently building records are missing from the town’s records in the few years around when it was built.

I did, however, meet a neighbor at a block party a couple years ago who gave me some insight. She’s a realtor who has lived on the street for decades. She said that the architect who built all the houses on the street built it for himself. It’s a smaller version of a house he built somewhere else in the area (would love to find that place someday!).

The owner before us bought it to live in short-term while he fixed it up. He did a lot of work in the 2 years or so that he owned it. Apparently, he spent over $70k (almost half what he paid for the house!) on a variety of improvements, some better than other, and including but not limited to:

Whew! So we kind of kicked back and just enjoyed the place for a little while.

Now that we’re settled, I’m itching to ramp up the pace of the projects a bit. Here’s what we’ve done so far:

I have a lot more things I want to do, but I’m trying to be patient and take it one thing at a time. Next year, I’m hoping to replace the bedroom windows. I figure I should paint and replace the light fixture at the same time. I want to strip all the layers of old paint and do some patching to the plaster before painting. I figure if I’m going to have the electrician come in and install the light fixture, I should have him do all the other fixtures I want to replace at the same time. And maybe add some outlets, since some rooms only have one. And then new blinds for the new windows…

Soon, I’m going to post a master list of all the projects I’ve done and want to do. For now, I’m trying to gather my thoughts and learn more about the 1920s and Tudor Revival style. I’m thinking my next project will be finding some information on the lights in the entryway and how to restore their finish.